In the field of LED lighting applications, soft silica gel is used as a packaging material, although the stress is low, but the silver plating layer caused by its porous structure is easy to be sulfided and blackened (Silver Tarnishing) is a non-negligible problem. LED suppliers generally require that LEDs not be produced and used in a sulfur-containing environment. However, sulfur in the complex environment where lighting fixtures are produced and used is almost an unavoidable reality, and there is no certain standard for sulfur content (or other possible pollutants) in the actual use environment, which is more difficult to monitor and control. Therefore, this paper proposes a new observation method for the occurrence of vulcanization problems, in-depth discussion of the mechanism of vulcanization of the silver-plated layer in the LED package, analysis of the difference in light attenuation after different aging modes, and comparison of the vulcanization phenomenon after the vulcanization test, using X-ray photoelectron spectroscope (XPS) Accurate surface analysis revealed the presence of chlorine. Furthermore, it was proved that the photoreduction reaction of silver chloride initiated the vulcanization mechanism, clarifying whether the initiation of vulcanization is a problem of LED encapsulation or the controversy of too much sulfur in the environment.

The development of new silica gels with stable temperature and UV resistance has promoted the rapid development of high-power LED packages, breaking through the development bottlenecks of reducing stress and improving light efficiency. However, in the field of LED lighting in recent years, after long-term use in the package of soft silica gel, it is often found that there is a reliability problem such as light decay and associated color temperature (color coordinate) drift due to the blackening phenomenon of the silver plating layer.

Therefore, LED suppliers are required not to produce and use LEDs 3, 4, 5 in a sulfur-containing environment. In general, the blue/white LED PPA bracket is made of hard silicone solid crystal because of the temperature limit. When sulfur invades the LED package, it will first be found in the gap between its metal/PPA. In the area, silver glue and hard silicone sealant have the function of blocking the contact between silver and sulfur. Therefore, it can be found that there is a circle of lighter vulcanization in the crystal chip of the LED chip (Fig. 1). When the vulcanization is severe, the vulcanization of the surface of all the silver-plated layers is more pronounced, and the blackening phenomenon is not difficult to confirm by black microscopy (OM) of the silver-plated layer and the sulfur element by electron microscopy (SEM/EDX). 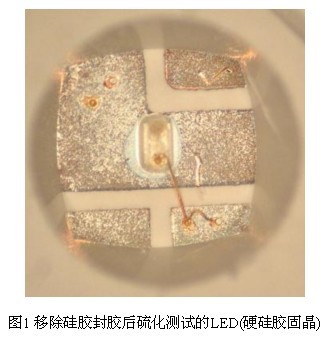 In fact, there are some blind spots in these test conditions: for example, LEDs are not lit during the LED test process and other polluting gases that may exist in the environment may accelerate the initiation of vulcanization: such as chlorine (Cl2), nitrogen dioxide (NO2), sulfur dioxide (SO2). Wait. Therefore, in the lighting environment where the possibility of sulfur is not completely ruled out, if the LEDs in normal use are vulcanized, we will face an unclear test standard for resistance to foreign vulcanization and the possibility of inducing vulcanization in the package. .

The following is a detailed analysis of one of the reasons for the failure of LED vulcanization in the practical application of gold-plated stents using Eutectic Bonding:

The aging test in this case has two types: continuous lighting aging 48 hours and On/Off lighting aging 48 hours. Figure 2(A) shows the continuous monitoring of the brightness decay after aging. It was found that some specific batches appeared in the black area of â€‹â€‹the LED solid crystal region and the significant attenuation of the luminous flux. The more serious ones have even exceeded 10%, and the luminous flux decays normally when the LED solid crystal zone is not blacked out. Moreover, it was found that the blackened batch LEDs showed a more obvious brightness decay trend after 48 hours of On/Off illumination aging than the continuous aging test, as shown in Fig. 2(B). 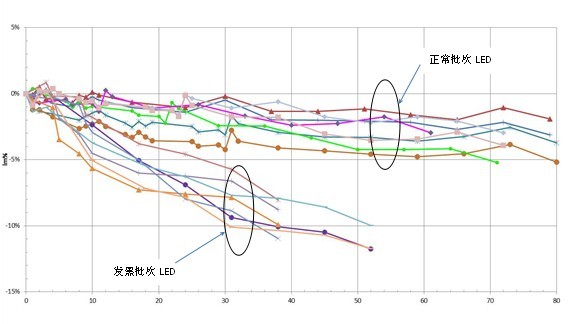 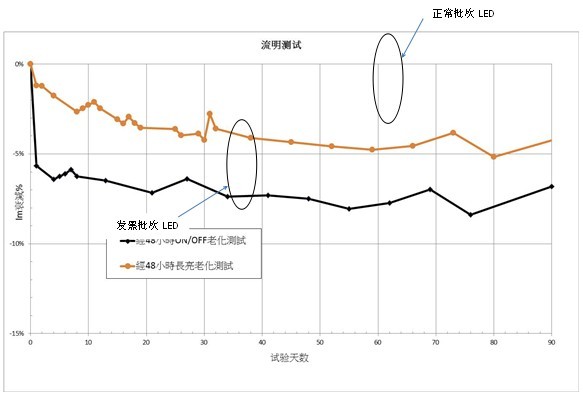 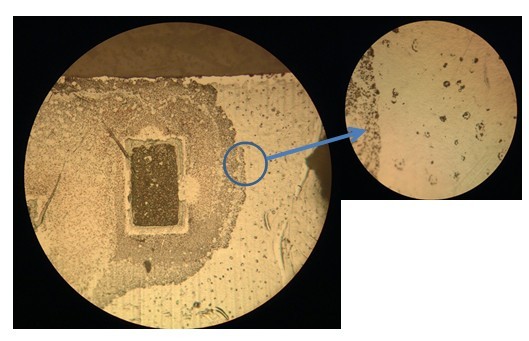 The general view is that the materials used in LEDs, including metal silver-plated stents, PPA, chips, phosphors, sealants, etc., do not contain sulfur, so it is judged that this blackening phenomenon is the reaction of sulfur from the outside and the silver plating layer to form black sulfide. Silver caused. However, in our case, no special sulfur-containing substances were found in the process and use environment. Moreover, the blackening situation only occurs in some LED production batches, and it is strange that the On/Off aging test seems to have a more pronounced blackening situation. Therefore, it is suspected that there should be problems caused by other factors.