Due to the increase in high-performance electronic products and the rise of environmental awareness, both smart phones and electric steam locomotives have increased the demand for power supplies. For the convenience of use, it is expected to increase the power outlets for outdoor or public use. Locked function.

The system provides a secure power socket with a locking function, so that the socket can be installed in a public place. In addition to the safe use, the system can also eliminate the power stealing behavior or the user pays, such as a leisure card or an access control system. To limit the use of the power outlet.

Electricity and water are indispensable resources in human life. Some people outside will lock their own private faucets to prevent others from using them at will. However, if the outdoor power outlet is not equipped with a lock function, it will be easily abused by others. In view of this, this article will share how to make a power outlet with a lock function.

There are still many power outlets in public places, which are not available to the public. Therefore, the power socket is covered with a cover and the slogan is affixed, or the power socket is hidden. However, this only has the effect of warning or hiding, but it cannot be true. Achieve the purpose of preventing others from using it.

The system uses the Radio Frequency Identification (RFID) technology to discriminate the user based on the user's payment or preventing theft, so that the power socket set in the public place is protected. Under the safety considerations, the general overload protection on the market is mostly using a no-fuse switch. The protection of the non-fuse switch is to change the degree of bending by the metal to determine whether it is overloaded, but when it is accidental, it is The insulation of the cable is overheated and melted, while the non-fuse metal sheet has not yet tripped. Therefore, in addition to the fuseless switch, the system adds a temperature sensor to the cable sheath to detect whether the cable sheath reaches the upper temperature limit.

The products on the market and the existing patents of the Republic of China only have electric shock protection, over-current protection, power selection, and universal serial bus (USB) charging functions. However, in addition to the above functions, the system also increases theft and theft. Function (Table 1). The system has a wide range of applications, not only for outdoor use, but also for public places such as MRT stations, rest stops, convenience stores, etc., combined with the use of leisure cards, or installed in community halls, saloons, etc., like access control Sensing device. In addition, the device is like a general socket, and when it is not in use, it does not consume any power at all, and does not cause additional electricity expenses. 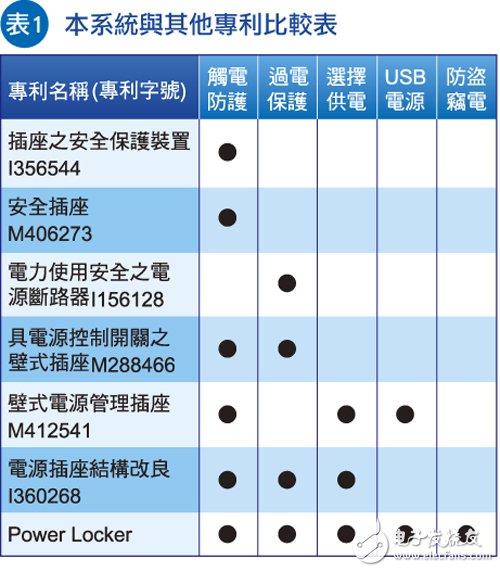 The system provides functions such as input/output (I/O), analog-to-digital (A/D) conversion, and timing interrupt by a microcontroller (MCU). After using the RFID technology to identify the user, the LM35DZ is used to sense the cable temperature. After the temperature is safe, power is supplied, and after the amount of current is obtained by the Hall element, it is used for power calculation.

The system uses the sensor to emit radio waves, touches the RFID tag in the sensing range, generates current through electromagnetic induction, supplies the wafer on the RFID tag, and emits an electromagnetic wave response sensor. When the responding radio wave is the specific frequency set at the beginning, the MCU's I/O pin emits a high-potential trigger relay to energize the outlet.

The Hall element is a magneto-sensitive element that performs magnetoelectric conversion according to the Hall effect. The working principle is that the Hall element is an N-type semiconductor wafer, and if it is controlled on the opposite sides thereof, the sheet is vertical. When the direction is applied to the magnetic field potential, a voltage proportional to the product of the size, current and magnetic field is generated on the other side of the semiconductor, and the A/D function of the MCU is converted into the magnitude of the current flowing through the timer. The current obtained by the A/D conversion is subjected to the Coulomb measurement operation.