The rise of the Internet of Things and smart life has driven the market to increase the demand for high-performance and low-power 32-bit microcontrollers (MCUs), so microcontroller operators have actively chosen from process and central processing unit (CPU) cores. And circuit design and other aspects to reduce dynamic and static power consumption, and take into account the overall computing performance.

In recent years, the rise of smart life and the rise of the Internet of Things, the demand for handheld consumer electronic products and wireless functions has become higher and higher, and the design has become more and more complicated. To improve performance while taking into account low power consumption, it is necessary to have a high performance and low performance. The main control MCU of power consumption is used as a platform. In addition, industrial intelligence is also being developed, such as remote monitoring, digitalization, and networking. In short, the increasing demand for cloud applications and the Internet of Things has led to more and more complex product functions and higher computing requirements.

In 2009, Ambit International (ARM) released the 32-bit Cortex-M0 core, providing a powerful platform for MCU vendors, and the advancement of process micro-reduction technology. The embedded flash memory system is popularized and price cuts. The main cost comes from The memory size and analog peripheral and input/output (I/O) pins, the cost difference of the central processing unit (CPU) core has been greatly reduced, and the rapid development of cost-effective 32-bit low-power MCUs is promoted.

Dynamic power consumption is related to operating voltage and frequency

The dynamic power consumption of the digital circuit mainly comes from the switching frequency, voltage and equivalent load capacitance. The calculation formula is as follows:

From the above formula, the most direct way to reduce dynamic power consumption can be understood. In order to reduce the operating voltage and operating frequency, the practical application of MCU usually requires a wider working voltage and higher performance. In terms of lowering the operating voltage, a more advanced process can be selected, and the CPU core, the digital circuit, and the analog peripherals independent of the pin input and output voltages are operated at low voltage through a linear regulator (LDO); the I/O pins and The analogy that must be connected to other external circuits is operated at a higher system voltage, which allows for both low power consumption and wide operating voltage.

On the parameter of reducing the operating frequency, a well-designed 32-bit MCU can highlight its performance advantage. In addition to the intuitive multi-million instruction (MIPS) comparison per second, the 32-bit bus also represents more. The high data access bandwidth enables the same performance at lower operating frequencies, which in turn reduces overall power consumption. In addition, if the MCU has built-in analog peripherals related to the operating frequency, such as a quartz crystal oscillator circuit, an embedded flash memory, or a current digital analog converter (DAC), the current consumption is proportional to the switching frequency, and is also included in the low Dynamic power design considerations for power MCUs.

Since the clock source is turned off, the main parameters affecting static power consumption are process, voltage, and temperature. Therefore, the ultra-low power process must be chosen to reduce the static power consumption, but the low power process is usually accompanied by a higher Vt, which makes the low voltage analogy difficult to design around. In addition, the MCU standby current of 1 microamperes, representing the digital circuit leakage + random access memory (RAM) holding current + LDO operating current + buck detection or reset circuit (BOD) operating current sum must be less than 1 micro Ampere is a tough challenge for flash memory, RAM, and more and more low-power MCU designers.

At the system level, we must consider both low power consumption and high efficiency. We must consider the requirements of the actual application. For example, the wireless environment sensor may turn off the MCU main clock and the CPU, only turn on the low frequency clock, and wake up the peripheral circuits for detection. When an event meeting the set condition occurs, the CPU is quickly started for processing; even if no event occurs, the CPU must be periodically awake to maintain the connection of the wireless sensor network.

In the remote control application, all the clock sources may be completely turned off, and when the user presses the button, the pulse source and the CPU are processed quickly. In addition, many applications will add an MCU as the main processor's auxiliary processor for monitoring keyboard or infrared input, refreshing the display, controlling the main processor power and smart battery management tasks. At this time, the average power consumption is more indicative than the pure operating power or standby power consumption.

The average power consumption is a combination of main parameters such as operating power and run time, static power and standby time, and switching time between different operating modes. This is illustrated in Figure 1. 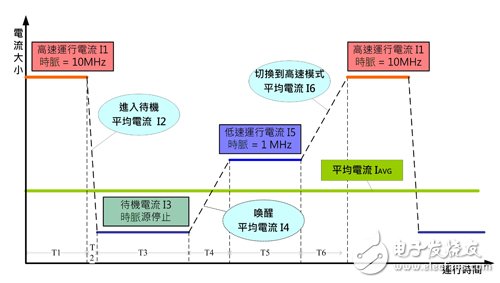 Because the time to enter standby mode is very short, ignoring the current consumption during this period, the formula can be simplified as:

Observed by the above formula, in addition to reducing the running current and static standby current, reducing the running time, wake-up time and high and low speed operation mode switching time is also an important means to reduce the power consumption of the whole machine. In addition, Figure 1 also indicates that the low-power MCU supports the dynamic switching of the running clock frequency is a necessary function.

4. Flexible configuration, with many options of different RAM/SSD/HDD, supports OS of Android/windows/Linux etc.

Touch Screen All In One Pc