The first part of this paper is a theoretical analysis of the boost converter that drives the LED string. Inspiring this research is the need to stabilize the backlighting loops for automotive applications. Loop control is an important design consideration that affects final performance due to the application of pulse width modulation (PWM) for dimming control. The second part introduces the application scheme and compares the measured frequency response with the theoretical derivation value.

Analog dimming of high-brightness white LEDs produces color cast. PWM digital dimming control is the preferred dimming method to prevent color shift, because the luminous intensity will be the average lumen intensity. The LED current amplitude and the dimming ratio during the PWM on period are independent of each other. 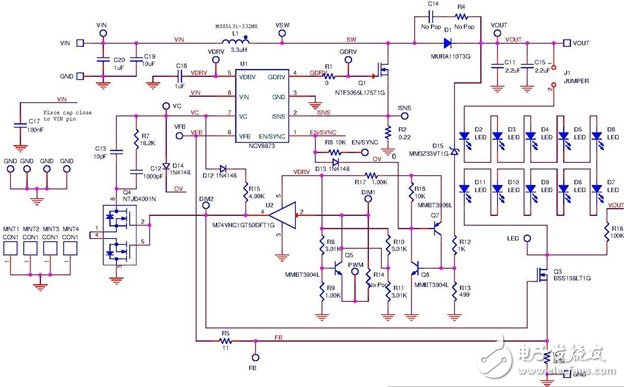 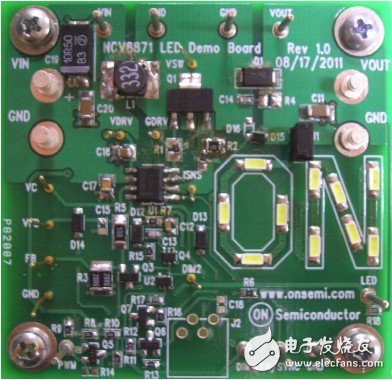 For ease of analysis, the key parameters of the NCV887300 controller are listed below:

- EN/SYNC pin: Can be connected to an external TTL command. Pins have dual functions and also support oscillator synchronization to an external clock

The design goal and working principle of the LED PWM dimming control circuit shown in Figure 1 are as follows.

Output leakage current losses must be minimized to help maintain output capacitor charge during deep dimming operation. The leakage current causes some output voltage discharge during the LED PWM off time, which in turn produces some analog dimming, which causes the compensation network to exhibit significant errors when the PWM is turned on.

- Ceramic capacitors have a much lower leakage current than electrolytic capacitors and are the preferred output boost capacitors.

- The output overvoltage monitoring circuit current consumption must be kept to a minimum. A monitoring circuit that utilizes a grounded resistor divider network is not suitable. The Zener-excited overvoltage detection circuit is selected in this circuit because the Zener knee voltage is much higher than the battery voltage and the leakage current is extremely low.

If an LED open fault event is not detected, it will result in an overvoltage operating condition. The current sense resistor R29 voltage feedback will be 0 V, which will result in an open loop output overvoltage condition. Discrete passive components are selected in the circuit to apply overvoltage protection to minimize output leakage current losses when the LED system is externally turned off. The D31 Zener diode senses the overvoltage condition and initiates a soft start (D29) of the controller IC by pulling the enable pin low and interrupting the boost switch operation (D28). Resistor R30 provides a discharge path for output boost energy storage capacitor C22.

Removing jumper J1 will turn off the LED chain to support an external load connected between the VOUT terminal and the LED terminal.

The LED dynamic impedance can be approximated based on the characteristic curve measured under specific operating conditions in the manufacturer's data sheet. The specific thermal operating conditions of the system may vary widely. The system-level method of system LED dynamic impedance is described in the first part of the article. This method performs characterization of the device under system-level thermal conditions. For the second part of the article, we use a frequency response analyzer to measure the current sense resistor, PWM FET impedance, and cumulative series dynamic impedance in a circuit under 100% PWM duty cycle thermal stability (see Figure 3). 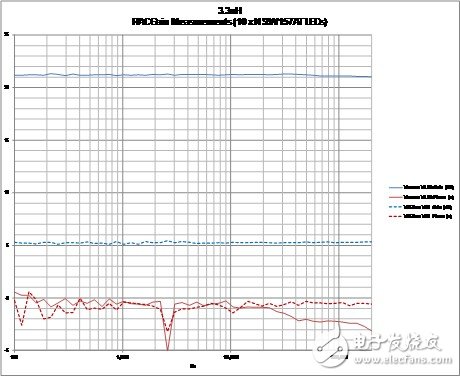 The control output (Vout) expression H(s) is derived in the first part of the article. Power is supplied to the LED string, but the feedback control is the LED current sense resistor voltage VRsense (see Figure 4). The controlled system transfer function H(s) must be adjusted according to equation (1).

Vc can be obtained from equation (8). 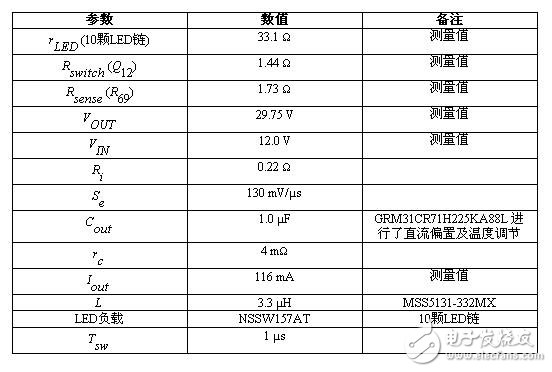 At high frequencies, the difference between the theoretical and empirical measurements becomes apparent. The difference is due to the lack of the RHPZ term in the modulation transfer function molecule of equation (1), which is described as a limitation in the simplified calculation of reference [4].

A slight difference (about 1 dB) between the theoretical value of the low frequency gain and the measurement result is observed. The operating losses of boost inductors, transistors, and rectifiers are ignored during the derivation of the DC operating point. If such losses are taken into account, the duty cycle DC operating point will be slightly larger, resulting in a reduction in low frequency gain. This can be observed by adjusting Vin (reducing the input voltage to reduce the resistive loss) and Vout (increasing the output voltage to incorporate the boost diode voltage drop) in equation (2).

The 1000:1 200 Hz PWM dimming operating waveform of the LED dimming circuit shown in Figure 1 is shown in Figure 6. There is a slight compensation capacitor voltage discharge on the VC waveform, which is the result of the race condition between the Q9 bidirectional switch response time and the PWM clamp activation through D19. Resistor R29 is introduced in series with clamp diode D19 to limit the compensation network charge depletion. The VFB waveform maintains the desired digital waveform and amplitude (no analog dimming).

The additional short-circuit duration GDRV waveform (6th pulse) occurs after the PWM signal command goes low, which is the result of the internal logic propagation delay response time of the NCV887300. The energy of this extra pulse helps to maintain the charge in the output boost capacitor because it compensates for some parasitic leakage current energy loss during the deep PWM dimming mode of operation. 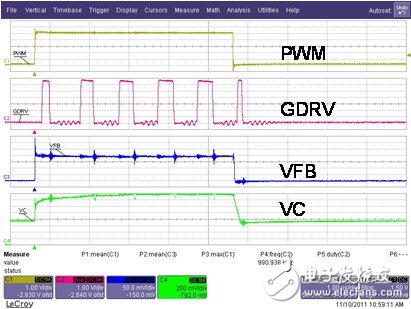 The theoretical small-signal response equation for the DCM boost converter that drives the LED string introduced in Part 1 of this paper is effectively applied to the analysis of the LED PWM dimming circuit in Section 2 of this paper. We explored the practical aspects of the 200 Hz 1000:1 depth dimming capability. We obtained simulation and measurement results, compared with the case of ignoring the phase error; due to the lack of the RHPZ term in the theoretical expression, the phase error occurs at high frequencies. The 1000:1 200 Hz PWM operating waveform shows excellent performance.