The system is a wireless identification system based on the principle of digital communication and integrated with a single-chip narrow-band UHF transceiver. The basic working principle and hardware design idea of â€‹â€‹the radio frequency identification system are expounded, and the flow chart of the program design scheme is given. Design RFID tags for vehicles from low power, efficient identification and practical perspective. The test results show that the system can effectively identify within 300m under the condition of complex road conditions (busy road surface), and can effectively identify up to 500 m under line-of-sight conditions.

This article refers to the address: http://

The Internet of Things refers to real-time collection of any monitoring and control through various information sensing devices, such as sensors, radio frequency identification (RFID) technology, global positioning systems, infrared sensors, laser scanners, gas sensors and other devices and technologies. Connected, interactive objects or processes, collecting a variety of information required by sound, light, electricity, biology, location, etc., combined with the Internet to form a huge network. Its purpose is to realize the connection between objects and objects, objects and people, all items and networks, and to facilitate identification, management and control. This project focuses on the key issues of data acquisition, transmission and application in the vehicle Internet of Things, and designs a new generation of vehicle-mounted RFID systems based on short-range wireless RF communication technology. The system consists of a short-range wireless communication unit (OBU) and a base station system (BSS) to form a point-to-multipoint wireless identification system (WIS), which can be used to cover the base station. Vehicle identification and intelligent guidance.

The system hardware is mainly composed of a control part, a radio frequency part and an external extended application part. The low-power MCU is used as the control unit to integrate the single-chip narrow-band UHF transceiver with built-in optimized antenna design. Powered by advanced photovoltaic cells, the highly integrated short-range wireless identification radio terminal (OBU). The terminal is small in size, low in power consumption, wide in scope, and has an open protocol and standard interface for easy connection with existing systems or other systems.

The system works as shown in Figure 1. 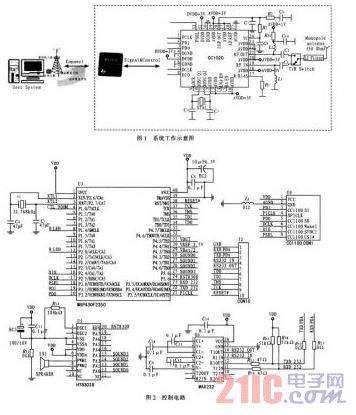 The control unit uses the MSP430 series produced by TI, a relatively low-power application in the industry. This series is a 16-bit ultra-low-power mixed-signal processor (Mired Signal Proessor) that TI introduced to the market in 1996. Application requirements integrate many analog circuits, digital circuits, and microprocessors on a single chip to provide a "single-chip" solution. In the WIS system, the working principle is the same in the OBU and the BSS, so the design of the OBU part is mainly introduced, and the schematic diagram of the control part is shown in Fig. 2.

The system uses two clock systems; the basic clock system and the Digitally Controlled Oscillator (DCO), which uses an external crystal oscillator (32 768 Hz). After the power-on reset, the MCU (Microprogrammed Control Unit) is first started by DCOCLK to ensure that the program starts from the correct position, ensuring sufficient oscillation and stabilization time of the crystal oscillator. The software can then set the control bits of the appropriate registers to determine the final system clock frequency. If the crystal oscillator fails when used as the MCU clock MCLK, the DCO will automatically start to ensure normal operation of the system; if the program runs away, it can be reset by the watchdog. This design uses the on-chip peripheral module watchdog (WDT), analog comparator A, timer A (Timer_A), timer B (Timer_B), serial USART, hardware multiplier, 10-bit / 12-bit ADC, SPI bus, etc. .

The carrier frequency of 430 MHz is selected as the working frequency band. This frequency band is the ISM frequency band and conforms to the national wireless management committee standard, and no frequency is required. Using FSK modulation mode, it has high anti-interference ability and low error rate. It adopts forward error correction channel coding technology to improve the ability of data to resist burst interference and random interference. The channel error rate is 10-2. At this time, the actual bit error rate is 10-5 to 10-6. The data transmission distance can reach 800 m in open field-of-sight conditions, baud rate 2A Kbs, large suction cup antenna (length 2m, gain 7.8 dB from ground level 2m). The standard configuration of the RF chip provides 8 channels to meet multiple communication combinations. Communication stability and anti-interference are enhanced due to the narrowband communication technology. The schematic diagram of the RF part is shown in Figure 3. 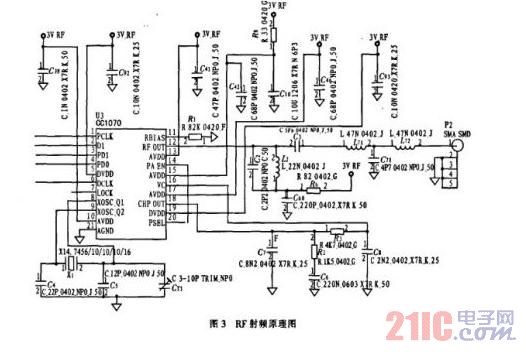 The system power supply part is powered by a photovoltaic battery as a daily working power supply and a lithium sub-battery as a backup battery. Under the condition of good illumination, the energy storage battery is charged by solar energy, and the guaranteed illumination time can meet the daily working needs of the OBU, greatly prolonging the service life of the backup battery and prolonging the working life of the OBU. Suitable for vehicles that are often used outdoors, it can collect enough sunlight for photovoltaic cells to work. 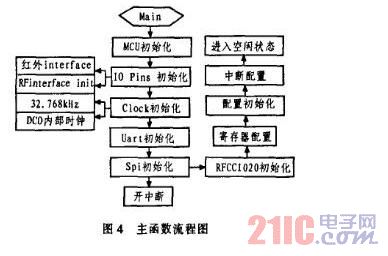 The OBU and BSS communication process is divided into three steps: establishing a link, exchanging information, and releasing a link, as shown in FIG. 5.

Step 1: Establish the coordinate information of the location where the OBU is connected and its ID code is stored in the Flash of the control unit MCU through the preset parameters, and is saved for a long time. The BSS (Base Station System) uses the downlink to broadcast the positioning (base station identification frame control) information to the OBU, determines the frame structure synchronization information, and the data link control information, and requests the connection to be established after the OBU in the active communication area is activated. And confirming the validity and sending the response information to the corresponding OBU, otherwise it does not respond;

Step 2: Information Exchange This design uses the method of detecting the intensity of the RF signal to determine whether the OBU enters the service area. When the detected signal strength is greater than 1/2 of the maximum signal, the transmitting and receiving parties implement wireless handshake. At this time, the OBU has entered the service. Area. In this phase, all frames must carry the OBU's private link identity and implement error control. For the judgment of the OBU uplink and downlink, the ID number can be used to determine whether it belongs to the same system. The OBU that is not the ID number of the same system is automatically deleted from the record. When the OBU reports information, it adopts a frequency hopping mechanism to randomly select a fixed channel in the service area to perform handshake communication to prevent channel congestion.

Step 3: When the release connection is also used, the detection signal strength is less than 1/2 of the maximum intensity, and the car is considered to have left the station. After the RSU and the OBU complete all applications, the link and the link identifier are deleted, and a dedicated communication link release command is issued, and the connection release timer is used to release the connection according to the application service. 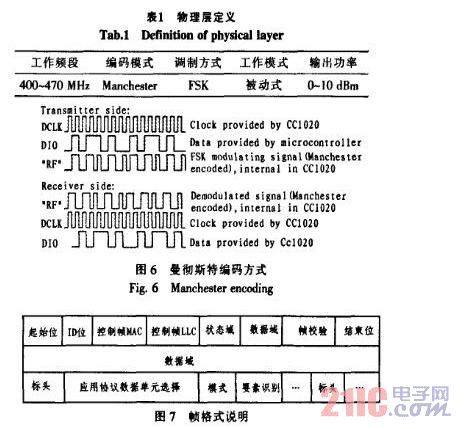 2) Data link layer The data link layer controls the information exchange process between the OBU and the BSS, the establishment and release of the data link connection, the definition of the data frame and the frame synchronization, the control of the frame data transmission, the fault-tolerant control, and the data. Link layer control and parameter exchange of link connections are specified. Data transmission takes place in data frame transmission, as shown in Figure 7.

The RFID system designed in this paper uses TI's low-power series MSP430 microcontroller, which is designed by TI for low power consumption of battery-powered devices. The RF chip is also TI's CC1020, with high integration, small size, low power consumption and easy installation. It is suitable for building vehicle-free monitoring and monitoring systems. The test results show that in the complex road conditions (busy road surface), the effect can be recognized within 300 m, and the line of sight can be identified within 500 m.