Overcapacity, price plunging, and sharp drop in gross profit are still the main styles of China's LED chip industry in 2012.

According to statistics from the High-Tech LED Industry Research Institute (GLII), as of the end of the third quarter of 2012, the domestic MOCVD stock reached 896 units, with an average operating rate of 58.4% and a capacity utilization rate of approximately 30.1%. In terms of price, the average domestic price of white light-illuminated chips in the first three quarters dropped by more than 30%, and the average price of display chips decreased by more than 50%. The rapid decline in chip prices has also led to a sharp drop in product gross margins. Most LED chip companies are in a break-even state, and the release of capacity has not brought direct profitability to the company.

At the same time, from the perspective of the current competition differentiation of chip companies, in addition to the top-ranking Sanan Optoelectronics has a large advantage in scale, the rest of the enterprises that are temporarily in the second echelon have not yet opened the core competitiveness. GLII expects these companies to have an opportunity to hit the second position in 2013. 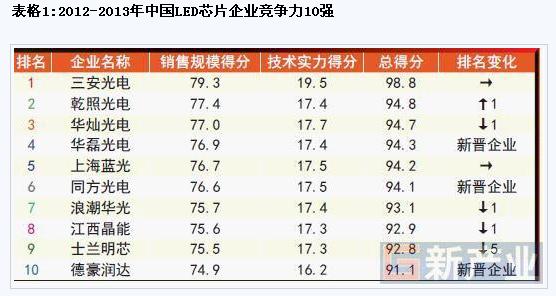 The ranking of the chip's competitiveness is based on the company's scope: China's domestically held LED chip R&D and manufacturing company.

Data range: For the first 10 months of 2012, the LED chip sales and technical strength evaluation data of the above-mentioned enterprises were used as evaluation criteria.

In 2011, Sanan Optoelectronics' LED chip revenue was 1.02 billion yuan, which was more than twice the scale of Huacan's revenue in the second year. In the first three quarters of 2012, Sanan Optoelectronics' revenues went against the trend, reaching 1.89 billion yuan, and the gap with the second-ranked enterprise's revenue scale further expanded. In the same period, most domestic chip companies' revenues decreased compared with last year. .

With the large-scale effect of Sanan Optoelectronics, the targeted patent war that may be launched by the international chip manufacturers will be the biggest challenge for the company.

In the first three quarters of 2012, the domestic red-yellow LED chip market competition was relatively moderate, and the price of the product dropped by only about 10%. In the same period, the price of the blue-chip chip for display decreased by more than 50%. The main products of Ganzhao Optoelectronics are LED red yellow light chips and concentrated solar cells (CPV).

Against the background of LED display and indicating slower market growth, the market size of red and yellow LED chips is unlikely to explode in the short term. The price of products has not decreased significantly, but the company's revenue has not increased significantly. As of the end of the third quarter of this year, Ganzhao Optoelectronics achieved operating income of 275 million yuan, down 0.5% year-on-year.

Although the LED red-yellow chip market encounters short-term demand bottlenecks, MOCVD for the production of red-yellow chips can also be used to produce CPV chips. Therefore, the main driving force for the continued growth of dry-light business revenue in the short term will come from future CPV chips. market.

As the gross profit of the display chip is continuously compressed and the market growth is limited in the future, Huacan Optoelectronics has begun to gradually enter the field of R&D and manufacturing of LED lighting chips.

In September this year, Huacan Optoelectronics announced that it plans to invest 1.8 billion yuan to expand its production in Suzhou. By then, the planning advantages will be highlighted and growth will be expected.

For the first time, Hualei Optoelectronics entered the top 10 market competitiveness of domestic LED chip companies. Founded in 2008, the company is a state-owned joint-stock company, mainly controlled by Hunan Coal Industry Group Co., Ltd., with a registered capital of 369 million yuan and a strong capital background.

Hualei Optoelectronics LED chip products are mainly used in the field of lighting and display. There are 32 MOCVDs, 2 of which are used for R&D. The rest of the equipment has basically been put into production, and the annual production capacity of epitaxial wafers exceeds 80,000.

Shanghai Blu-ray currently has two production bases in Shanghai and Hefei, which mainly develop and manufacture LED lighting and display chips. In the first half of this year, the price of chips in the domestic market dropped significantly. As the Shanghai Blu-ray Hefei base started to put into production smoothly this year, the shipments increased, making the company's overall revenue in the first three quarters basically the same as last year.

Founded in 2000, Shanghai Blu-ray is a second-tier subsidiary of Rainbow Group. It has a strong capital background and is one of the earliest LED chip companies in China.

As of the end of October 2012, the total number of MOCVDs in place in Shanghai was ranked third in the country. Among them, the Shanghai base machine is mainly a small piece machine, and the Hefei base is a new machine introduced in 2011. The current investment rate has reached 60%, and it is expected to be put into production before the end of the year.